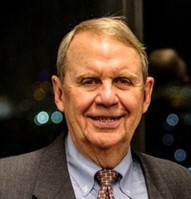 From 2003 through late 2013, he was an executive at iRobot Corporation serving consecutively as the President of the Government and Industrial Division, Chief Operating Officer, and as Chief Strategy Officer. His leadership responsibilities spanned from “high tech/early stage” to the ipo, and through becoming the world’s leading mobile robot company. He personally led the company’s design, development, and production of military robots for service in Iraq and Afghanistan.
He served as Commander of the Naval Air Systems Command, where he was responsible for research, development, test and evaluation, engineering and logistics for naval aircraft, unmanned systems, air launched weapons and sensors, from June 2000 until his retirement in July 2003. He previously was assigned as Commander of the Naval Air Warfare Center Aircraft Division at Patuxent River in July 1997 and a month later assumed additional responsibilities as the Assistant Commander for Research and Engineering of the Naval Air Systems Command.

From January 1994 to April 1997, Admiral Dyer served as F/A-18 Program Manager, leading engineering, and manufacturing development efforts on the new F/A-18E/F, continued production, and fleet support of the F/A-18C/D, and all F/A-18 foreign military sales. Under his leadership, the F/A-18 program won the Department of Defense Acquisition Excellence Award and the Order of Daedalian. Earlier in his career, he served as the Tech Director for the High-Speed Anti-Radiation Missile and as Navy’s Chief Test Pilot. Prior to that, he was an operational aviator flying from aircraft carriers around the world.
He received the James H. Doolittle Award for “outstanding accomplishment in engineering achievement in aerospace technology”.

Vice Admiral Dyer is a graduate of North Carolina State University with a B.S. in chemical engineering and the Naval Postgraduate School, Monterey, California with an M.S. in finance.

He is an elected Fellow in the National Academy of Public Administration and the Society of Experimental Test Pilots.